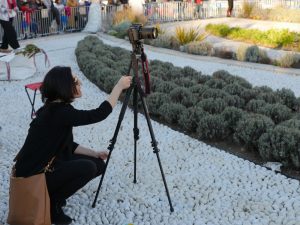 Palmar Álvarez-Blanco is a Professor in the Spanish Department at Carleton College, MN. She earned her BA in Hispanic Philology from the University of Valladolid (Spain), her MA from Villanova University and her PhD in Spanish Literature from the University of Colorado at Boulder. She is the co-founder of ALCESXXI, the co-founder of the Journal of Contemporary Spanish Literature and Film and Carleton’s International Film Forum. She is an active collaborator with the collectives Books in Action, OVNI and the Critical Institute of Unlearning.

Alvarez-Blanco’s journey as a scholar engaging the world of artivism and grassroots movements has deeply informed her own research and teaching practices. Her pedagogical portfolio includes a variety of projects that serve to help students acquire a better sense of community engagement, visual literacy, the art of interviewing, the application of film language and the curating process of audio-visual materials, either through archives or traveling exhibitions. So far she has co-curated two traveling exhibitions that have been hosted by six other universities in the USA: Welcome to the World and Satirical and Political Graphics in the Modern World.

Alvarez-Blanco’s research focuses on the transformation of cultural paradigms in the frame of capitalism and its crises. Among her essays focused on capitalist culture and alternative cultural imaginary are: “Culture a la contra: A Cultural Paradigm Toward Alternatives to the Civilizatory and Ecological Crisis”, in the book titled Spain After the Indignados/15M Movement: The 99% Speaks Out; “De-fencing: Notes on the Cultural Ecosystem of the Commons in the Post-15M Spanish State” (Forthcoming in Boundary 2) and  “Transformative and Emancipatory Research and Education: A Counter-Practice in Research and Teaching” with Steven Torres (in Review of Education, Pedagogy, and Cultural Studies, VOL40, 2018). In addition to being the architect, curator and creator of the Constellation of the Commons project, she has coordinated and co-edited two collective volumes on the topic: Profiles of the Current Spanish Narrative (2000-2010): A Dialogue Between Creators and Critics; and Mortgaged Imagination: Contributions to the Debate on the Precariousness of the Present (2017). Her upcoming books In Route with the Commons. An Archival Memory of a possible Constellation (2017-19) and Towards a Common Sense are a road map and an academic reflection respectively on the culture of the commons in communities of practice and self-managed collectives that have emerged over the past decade in Spain.